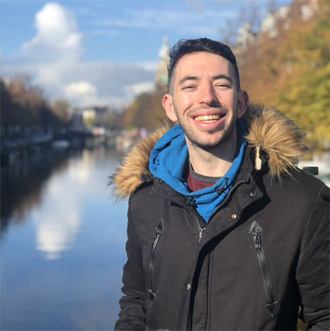 Home >
You & Us >
Sebastian, beneficiary of a CentraleSupélec Foundation scholarship

I owe you my life and my future.

Getting into CentraleSupélec was the opportunity of a lifetime.

I come from Argentina, I studied industrial engineering for four and a half years at the University of Buenos Aires. Then I learned about the possibility of doing a double degree in France. I had this wish to do an academic exchange, and I had first thought of Spain or England, because of the languages. But France was the opportunity of a lifetime! So I started studying French and in August of my senior year, I took an intensive course. I applied to a few schools, but I knew that if I was admitted to CentraleSupélec, the choice would be obvious! The only issue was money. My parents don’t have much money, and I was also working as a teacher in Argentina. Without a scholarship from the CentraleSupélec Foundation, I could not have come.

When I arrived on the CentraleSupélec campus, I was very surprised. It was amazing! In Argentina, there are no such large campuses. Here, it’s like in the movies, like in High School Musical! Here, we live on campus, which is great for getting to know other students and participating in the very busy community life. I am very involved in the International Student Office (BDI), and I even led an event around international cinema. And I’m 10 minutes away from all the classes…

To the donors of the Foundation, I owe my life and my future.

I am very grateful to them, because without them, I would not be here. I don’t know if I could have had another opportunity like this, or even getting to know Europe. To possible future donors, I would like to say how much their support will help students like me. They can really help a lot of people who, without them, could not hope to get an international degree.